A Month of Sequels

Looking over my spreadsheet of the month, I see a heck of a lot of sequels, which explains my lack of blogging. I've already talked about Joanna Bourne, Eloisa James, Jillian Larkin, George RR Martin, Louise Penny, Kathy Reichs, and Dorothy L Sayers. I don't want to bore you, after all - if I'm still reading them, I'm still enjoying them. (Oh, Louise Penny! You keep making me cry. Chief Inspector Gamache is - gasp! - topping even Inspector Lynley as my most beloved modern police officer.) 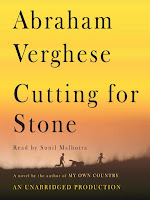 But I've got to talk about a book I'd meant to read forever, and finally listened to this month: Abraham Verghese's Cutting for Stone. Oh, y'all. This book is gorgeous, and tense, and loving, and sad, and vivid. I was constantly bereft, then hopeful, and then bereft again. Sunil Malhotra was the narrator, and his voice really resonated throughout the story of Dr. Marion Stone, his quiet twin Shiva, their adoptive parents, and their lives in Addis Ababa. The twins are literally inseparable until birth, a virtually inseparable afterwards, through much of their childhood. Then: things go awry. It's just great. 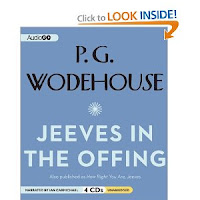 I went through a gorgeously long P.G. Wodehouse phase in middle school - checked out every title in my local library. (Same branch I visit constantly now. Have I mentioned that I love my librarians? They are the nicest.) Periodically over the past couple of years, I've listened to some of the BBC full cast audio versions of Bertie and Jeeves tales, but haven't run across any of the titles as narrated by Ian Carmichael, until Jeeves in the Offing. (I've had the pleasure of Carmichael's narration on several Dorothy L Sayers novels, and he just screams Lord Peter to me - his voice is always in my head when I read Sayers in print.)
Carmichael is just as deft with Bertie Wooster - joyful, energetic, a tad daft, full of plummy rolling 'Rrrr's and glib onomatopoeia fun. Jeeves, Kipper Herring, Aunt Dahlia, Bobbie Wickham, and all the tertiary characters are equally well-rendered. It's all such a perfect complement to a classic Wodehousian farce - fake engagements, familial obligations, butlers who aren't butlers, a dachshund, and the infamous silver cow creamer all interact at cross-purposes. Unless the purpose is to get Bertie into deeper and deeper water, all while Jeeves is away on vacation. In that case, all the stars align perfectly.
Bertie finds he is unable to resist Aunt Dahlia's command that he keep her goddaughter from an unwise match. Although this involves falling off chairs, encountering his reviled old headmaster, falling in lakes, and encountering his erstwhile girlfriend, he gamely applies all the Wooster intellect to the proposition. If you're at all familiar with the Wooster intellect, you'll be happy to know that he eventually interrupts poor Jeeves's shrimping trip so that greater minds can prevail and save the day. It's an unchanging tale, but Wodehouse constantly managed to retell it with sharp dialogue and an unflagging commitment to the absurd, which makes those long Jeeves and Wooster phases so gorgeous whenever they come along.
Posted by Mel at 11:57 PM No comments:

Truth is More Sarcastic than Fiction

I've managed to get myself involved with reading / listening to 5 books at once. (Well, not simultaneously... you know what I mean.) Not to mention the one I'm writing. Since that leaves me without any fiction to blog about, I'm turning to real life instead. 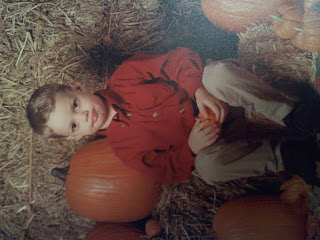 This is my little pumpkin, D. He turned 16 this month. This, of course, involved many moments of R & I saying, "We've been parents for that long?" and telling mortifying (to D) stories of his adorable toddlerhood and so forth. We're pretty happy with the guy, especially because he only grew one inch in the last year, and kept the same shoe size, which is a boon to those of us purchasing his clothing and footwear.

Also, of course, we had the Driver License Events.

We live in a Really Major Metropolitan Area, which means, among other things, very long lines at the DMV. The High School Information Network indicated that a trip to a nice rural town would mean 3-4 minutes in line rather than 3-4 hours. So driving an hour each way for the road test is a "good idea." Never mind factors like the high cost of gas, and that sitting in the DMV waiting room at least theoretically allows for reading or homework while driving doesn't. Still, a road test on quieter roads is a tad less stressful, and the boy's heart is set.

But wait! Road tests are only available via appointment. And appointments have to be made in person, by the test-ee. Somehow, Parental Logic pointing out that this would mean 4 hours of driving to and from the Rural DMV didn't hold water. Everybody jumping off bridges, and all that. Also, the Major Metropolitan DMV has a known 5+ week wait for the appointment, and who wants to wait that long? Not my 16 year old, that's for sure. There was some vague mention of potential lines when going back for the driving appointment, even though that was unsubstantiated by the High School Information Network. Probably because they all jumped off the bridge of the Rural DMVs.

So I'm looking up rural DMVs. Telling D that yes, mileage wise, that one by the beach is closer. But it involves driving through downtown and past one of the airports to get there, so it's not quicker. I pick one with a Google Map-estimated drive time of 48 minutes, and ascertain that it will be open on Columbus Day at 8 a.m.

D is eager to be the first one in the door, and I have to work that day, so I let him drag me out of bed at 6:00. We spent the day before parallel parking up and down our street for an hour, and he's been doing very well. We both feel ready. (His dream is that they'll say they have an appointment that same day if we'll wait around to take it.) He grabs the keys and heads out to the car.

I'm in the passenger seat, attempting to stay level-headed and instructive and also to press the right buttons to turn off the damn alarm. And hoping my neighbors weren't planning to, you know, sleep in at all.

He was a little rattled. But he took a deep breath. Restarted the car. Successfully backed down our driveway (one of the toughest of the routine tasks.) We were on our way.

A quarter-mile later, he had to turn onto the feeder road of the freeway, ideally into a left lane so he could U-turn at the intersection. And yet. He chose a good moment to turn, he pulled out with good speed, but not only into the right lane, but up onto the curb. With both passenger side tires. Narrowly - and I mean narrowly - missing a fire hydrant before he plunked the car back down onto the street.

So for future reference, son, that's what it feels like to drive on a flat tire.

We switched seats and I got the joy of the shoulder-wrenching teeth-clenching quarter-mile drive (ker-plunk, ker-plunk) back onto the feeder road, down the major thoroughfare, and into the mall parking lot to the Sears Auto, which opened at 8 a.m. As we abandoned the car and walked home, he finished the seventh stage of grief (the rage was something to behold! but my favorite was bargaining - it was pretty clear the Traffic Gods were just not in the mood to listen to his pleas.)

So we sat around for an hour, then went back to Sears where they'd have finished with us sooner if some something mechanical something something else tool-related hadn't intervened. But hey, it allowed us plenty of time to watch Jerry Springer "help" some nice people who were forced by the economic downturn to cheat on their spouses. Oddly, usually with their spouse's younger, hotter siblings, which must be a lesser-known side-effect of the recession. Who knew?

8:30, Mel in the driver's seat and $170 poorer, we hit the road again. Once we got to Rural Town, D was confident enough to drive to the DMV, where we found a short-ish line in the most stereotypically tiny 3-person shack of an office ever imagined by whoever it is who goes about imagining these things.

After a wait while the nice women at the Rural DMV help a wheelchaired senior citizen who arrived after us (but that is part of the Rural DMV Stereotypical Way of Life), D is vision-checked, thumb-printed, relieved of $11, and then, the big moment arrives. DMV woman pulled out the giant "Road Test" binder.

Drum roll, please. (D's present from us was a drum set. Either because we love him and want to please him, or because we are a little cuckoo.)

Right around the time school gets out.

Heaven forbid I should ever doubt the High School Information Network again.
Posted by Mel at 8:46 PM 4 comments:

Email ThisBlogThis!Share to TwitterShare to FacebookShare to Pinterest
Labels: son

A Plug for Plugged

Eoin Colfer's Plugged is hilarious. (I say that while hearing narrator John Keating's sarcastic Irish accent, which puts a lot of emphasis on the 'hi' and doesn't mean what it says as much as I do.) I've read/listened to all of Colfer's Artemis Fowl books, and this adult novel has the same sensibility: adventure prompted by one unexpected event after another, situational humor, Our Hero scraping by with a little help from luck and a little help from law enforcement officials who would rather not be in the position Our Hero puts them in. Shades of Butler, Holly, Root, and much of the rest of the Fowl gang abound. This isn't a deep thoughts or tense mystery novel, but it is engaging and fun.

Our Hero is Daniel McEvoy, an Irish ex-military ex-pat working as a bouncer at a seedy New Jersey casino. His overriding concern is the progress of his hair implants - until he gets drawn into investigating the murder of one of the bikini-clad casino hostesses and the disappearance of his back-alley surgeon friend. In short order he's dealing with drug runners, corrupt cops, mobsters, and his crazy upstairs neighbor, and at no point does he feel particularly competent to handle any of it. He's an eminently likable Our Hero - smart, talented, acerbic. I was all over Keating's narration - it was bright and crisp and handled the pace of the narrative charmingly. (I think we all know by now that I'm a sucker for the Irish accent. My fear céile doesn't sound as Dublin as he did when I imported him, but it pops up delightfully at times.) (It means 'husband' in Irish. Yeah, I have an Irish dictionary in my study, jealous?)

My 16 year old saw the discs and claimed them next, and I wish him 8 1/2 hours of happy listening. Both boys are Colfer fans, but due to the ex-strippers and a certain amount of nude gun play (not an euphemism. Or, not entirely), I wouldn't let anyone younger get ahold of it.
Posted by Mel at 8:16 PM 2 comments: