The Dinner: Pull Up a Chair 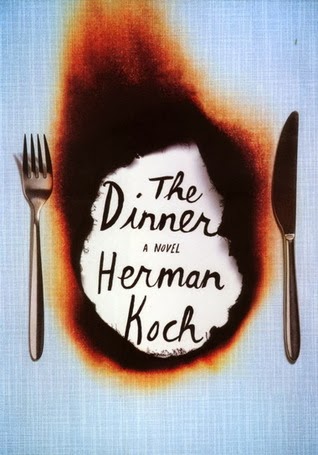 From Goodreads: "It's a summer's evening in Amsterdam, and two couples meet at a fashionable restaurant for dinner. Between mouthfuls of food and over the polite scrapings of cutlery, the conversation remains a gentle hum of polite discourse—the banality of work, the triviality of the holidays. But behind the empty words, terrible things need to be said, and with every forced smile and every new course, the knives are being sharpened. Each couple has a fifteen-year-old son. The two boys are united by their accountability for a single horrific act; an act that has triggered a police investigation and shattered the comfortable, insulated worlds of their families. As the dinner reaches its culinary climax, the conversation finally touches on their children. As civility and friendship disintegrate, each couple shows just how far they are prepared to go to protect those they love. Tautly written, incredibly gripping, and told by an unforgettable narrator, The Dinner promises to be the topic of countless dinner party debates."

I'm all: woah. Then I'm all: yikes. Then I'm all: NO WAY. What a horrifying delightful spectacle of a novel. Paul deftly drew me right into the midst of his disdain for his brother, the very up-and-coming politician Serge. I'm right there with him as he disparages the fancy restaurant, the pretensions of the headwaiter, the tiny portions. He speaks with love and tenderness and respect for his wife and son, even while alluding to the very hot water his son and Serge's son are in.

But the anecdotes pile up, inexorably, each one a little signpost. And suddenly I'm on a path, being guided by a trickster demon, and there's no way to go back. By the time Paul orders a grappa, I'm peering at this book through my fingers (I can do that when it's an audiobook.)

Clive Mantel ate up The Dinner with a spoon. (Sorry. Couldn't resist.) The way he spits out the name "Serge" every time; his fond tone whenever he mentions Paul's wife; how calmly he relates Paul's increasingly eye-popping stories as if he, like Paul, considers them just everyday moments.

I've seen a lot of reviews saying that The Dinner is an exploration of how far we will go for those we love, and that sort of thing. To me, that's not the theme. Instead, it's about facades, why we construct them, and how those we love do and don't see through them. Paul repeatedly quotes the opening of Tolstoy's Anna Karenina ("Happy families are all alike; every unhappy family is unhappy in its own way.") What Koch examines in The Dinner is the unique versions of unhappiness that make up one of those unhappy families; a funny and compelling and dire warning to all.
Posted by Unknown at 1:13 PM No comments:

The Son, Reviewed by a Texan Daughter

From Goodreads: "Spring, 1849. The first male child born in the newly established Republic of Texas, Eli McCullough is thirteen years old when a marauding band of Comanche storm his homestead and brutally murder his mother and sister, taking him captive. Brave and clever, Eli quickly adapts to Comanche life, learning their ways and language, answering to a new name, carving a place as the chief's adopted son, and waging war against their enemies, including white men-complicating his sense of loyalty and understanding of who he is. But when disease, starvation, and overwhelming numbers of armed Americans decimate the tribe, Eli finds himself alone. Neither white nor Indian, civilized or fully wild, he must carve a place for himself in a world in which he does not fully belong-a journey of adventure, tragedy, hardship, grit, and luck that reverberates in the lives of his progeny.
Intertwined with Eli's story are those of his son, Peter, a man who bears the emotional cost of his father's drive for power, and JA, Eli's great-granddaughter, a woman who must fight hardened rivals to succeed in a man's world."

So. My husband's from Ireland. I explained to him why this book rubbed me wrong this way: your hero is the son of mythic Celtic queens and kings. He fought off the Normans and the Vikings and the  British, too, for good measure. Helped St. Patrick with the whole snake issue. Meets the locals down the pub of an evening for a reflective pint. Has a son he lost to the IRA, a daughter who married a Protestant land owner, an aunt or three who perished in the potato famine. Let's see, what else? Oh, yes, he's best friends with a Druid and learned to write Ogham symbols before being shown the mysteries of beehive burial chambers. When the Troubles began, he watched the younger generation struggle to choose sides, all the while holding true to his abiding principals and playing the tin whistle and attending church every Sunday. His favorite child was in the GPO that day; his least favorite was the only one to survive. One granddaughter becomes a famous Irish dancer, another is part of the diaspora, and his descendants are uncannily good at surviving when the Celtic Tiger roars off into the sunset. They all invest properly in technology and also know how to farm their long-held land for bricks of peat to burn of an evening.

Do any of their characters need to be more deeply developed than that? Is having a tangential role in every Child's History of Ireland significant moment enough to make their dynasty worth reading about for hundreds and hundreds of pages? If so, great. The Son is just right, then.

And I don't dispute that it's well-written. I mean, I could have done without the detailed descriptions of how to use every bone of the buffalo, or how to cap an oil well, or how wild mustangs are different from domesticated horses. But then again, I'm a 7th generation Texan. I not only had all those lessons from my own schooling, but I've reviewed them all when my sons took the same year-long Texas history classes in 4th and 7th grades. So Meyer is telling a very (very) romanticized version of Texas lore here, and that's delightful and romantic and fascinating if you've never heard it, but once you have, or if you take that away from this tome, is what's left worth the hype?

For me, it wasn't. I felt beat over the head by his themes (you should probably respect who came before you, while keeping in mind that whoever that was that you're displacing stole the land from someone else to start with). I liked Eli okay,  and his progeny to some extent, but he never hit me as one of those vital characters you just can't escape once you close the book.

I do have tolerance for the sensationalizing of a dramatic history. I've enjoyed plenty of epic sagas full of sweeping adventures ripped from the headlines of whatever era they visit. In this case, though, I didn't feel like the underpinnings were enough to support the hype.

And then there's JA, who is worthy, I grant, of lots of pages because she encompasses so much that her great-grandfather would admire. And yet, she can only do so by eschewing everything 'girly' about herself, including her non-initialed name and the pearls from her grandmother. She works damn hard to fit into a man's world, and that was interesting and engaging, but also sad. I'd not have minded another female character who was interesting and engaging, even though she was 'only' raising her children on the frontier or surviving years as kidnapped Comanche chattel, or subverting societal expectations of her role as a member of the non-white underclass. (These women existed in the book, they just... didn't do much, except act as foils to the men and sometimes deliver succinct speeches about their lives before being shunted off to the sidelines for the rest of the book.)

The narration of this audiobook was great. The various narrators were quite in tune with their characters' cadences, especially in the case of Eli, whose patterns of thought were so well-suited to Comanche life even before he was kidnapped. I wish I hadn't had so very long to get acquainted with everyone, but as I did, I'm glad I enjoyed that aspect of this novel.

There, I'm done being surly now.
Posted by Unknown at 11:37 PM No comments: