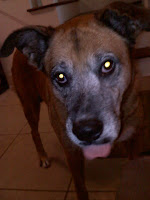 Adopting our puppy has been both energizing and thought-provoking for 10-year-old Ali. In the past six months she has learned so much, belying the old adage.

Ali on Walkies: Do we have to go so fast? Are we there yet? Isn't it time to turn around? Why is Eve pulling so hard on her leash when it just makes Alpha cue up a new podcast and keep us out even longer?

Ali on Dinner: Great, time to body-check Eve again. How's a mutt supposed to get enough to eat around here?

Ali on Sleeping: Wait, we get to sleep in Alpha's room? With the carpet and the fan and the opportunity to nose for scratches if any hands flop near the edge of the mattress? I should have tried this whining-in-the-middle-of-the-night thing ages ago!

Ali on Play Time: Ha! Take that, Eve! I'm taller than you, I've got Boxer lineage and you know what? You know what?? Boxers are fighters, yeah, that's right, fighters! Come and get me, little girl, just you try it. (Oh, come on, Eve, stop with the biting my collar thing, will you? That's right, lick my ears a little. That's the stuff.) Hey, look at my Mean Fighting Face, isn't it scary? Grrrrrr! I curl my lip at you. (Whew. Can we rest now? We can? *flop!*)

Ali on Noises Within the House that Might be Knocking at the Front Door: What's that pup doing.. oh! Bark! Bark! BARK BARK bark BARK! Grr-bark!

Ali on Fetch: Why is Beta throwing that stuffed orca again? And why does Eve keep chasing it? Is it suddenly alive? Let me run to check! Almost there! Oh, wait, no, it's not alive. Keep your fur on, Eve, I don't want your stupid orca. Oh, wait, she's throwing it again. I should get in on this! Run! No... still just the stupid orca. That's it, I don't care what you people say, I'm not playing. Hey! Where is Eve going to so fast?
Posted by Mel at 10:09 PM No comments:

I would have gone to bed hours ago, but. There were only 60 pages left. And that doesn't take long, and it's not like anyone else was asleep yet. And it was only 11.

And then it was midnight, and I paused to talk to K about the morrow's black belt test (go, K!)

And then it was one, and there were only a couple of pages to go.

And then it was one-thirty, and I stopped. And looked around. And beside me in bed, R was reading. And down the hallway, I saw lights under all three bedroom doors. The kids were all reading, too. (I have borrowed one of my brother's kids for a few weeks. It's awesome, cause she'll watch bubblegum movies with me and dance/fashion/design based reality shows, and loves the library as much as I do. I may not let her go home.) (She also plays lots of games with the boys, and pets the pets. She is in serious danger of "missing" her flight.)

Anyway, so it's not a new realization about my life, the incessant reading around me. But I'd just like to say: it's a Friday night, mid-summer, and the place is humming with the sound of pages turning. We are crazy-types, no doubt, but this is just all-round good.

Still. I should sleep. Got to rest my eyes for the novel I'll be starting tomorrow. Sweet dreams, all.
Posted by Mel at 1:50 AM No comments:

Email ThisBlogThis!Share to TwitterShare to FacebookShare to Pinterest
Labels: reading

I know I say this all the time, but these are some good books

New-to-me author (and how I do love good new-to-me authors) Chris Adrian's latest, The Great Night, went around tickling my brain's funny-bone through every chapter. It's a retelling of A Midsummer Night's Dream, which I listened to a couple of months ago, set in Buena Vista Park in San Francisco. Three would-be-party-going mortals are trapped in the park along with Titania and her crew, a rampaging Puck, and a group of homeless people-cum-theatre troupe with a beef against the mayor. There's romping and running, magic and menace, and a lot of the aftermath of heartbreak. Adrian is very playful, although the core of the story is sad and lonely - the dichotomy can be disconcerting. But I have faith that, somewhere beyond the pages, Jordan Sasscock will move his party into the park and restore a missing balance to a lot of lives, faerie and otherwise.

My first Libba Bray encounter (A Great and Terrible Beauty) was enough to put her on my "read everything she's ever written, STAT" list, which leaves me terribly impatient now that I'm done with the catalogue and have to wait for new titles. Fortunately, my hunger has been slightly slaked thanks to Beauty Queens, her excellent tale of a bunch of pageant teens who crash on a deserted island only to discover darkness afoot. They also discover some personal depths to accompany their skin-deep beauty; even the seemingly-tritest revealing to themselves and each other that they're good for a lot more than walking well in sparkly dresses. Bray throws in reality-show pirates, eco-warriors, corporate/government hybrid manipulations, and some funky flora and fauna to keep the beauty queens on their toes, even though their high heels were lost in the plane crash. I listened to the audio, read by the author, which was a huge treat.

Started Early, Took My Dog is Kate Atkinson's fourth Jackson Brodie novel - the private investigator just can't seem to settle down into a nice, quite retired life. He is, as always, drawn into the past of a missing girl, and it is his dogged determination to see things through as much as any investigative skill or luck that sees him through the twists and turns ahead. I enjoy the long, slow arc of Jackson realizing a bit about himself as well as Atkinson's clever references, smashing details, and evocative literary tour through England. She is another author I've followed faithfully for years, and although her Brodie books are a departure from the rest, everything she publishes is entertaining and worthwhile.
Posted by Mel at 10:52 AM No comments:

More detectives, this time with paint

This summer I've been positively frolicking with Lord Peter Wimsey, Dorothy L. Sayers's charming amateur detective. How I got to be 41 years old before I picked one up is as big a mystery as anything Lord Peter tackles. (I'm prematurely sad about the fact that by the time I'm 42, I'll have read everything Sayers published.) The last one I finished, Five Red Herrings, is so far my least favorite, though you may as well ask which type of scone I like least. (However, Amazon didn't have an image of it to link, so I put in Have His Carcase, which I'm in the middle of now and relishing for all its great worth.) What holds Herrings back is the scarcity of Bunter, Wimsey's wry and uber-capable manservant/fellow investigator, and of Chief Inspector Parker, who sits back at Scotland Yard not doing much this time as Wimsey bounds from place to place in Scotland figuring out who killed the painter Campbell. It all hinges on what was missing from the scene of the crime, and only because Wimsey knows a bit about painting does anyone know there was a crime at all.

Painting techniques and small-town artists are the focus of Louise Penny's first Chief Inspector Gamache mystery, Still Life. Penny's Anglo-centric Quebec town of Three Pines is full of interesting people who seem to hover frequently on the brink of change, and it's nice to know that Gamache will be back to visit them, even though it will be to solve future cases. The murder in Still Life is of Jane Neal, the perfectly nice, beloved, slightly reclusive retired schoolteacher. Gamache is an intellectual detective, who uses teamwork and insight to solve cases, and he is great fun to watch at work.

Turning to suspense, this month I read my first Geoffrey Household novel - his most famous, Rogue Male. Atmosphere, psychology, intrigue, a mean feral cat who might ruin everything - this has it all. No wonder it's a classic. The hero (unnamed) has been caught almost-assassinating an also unnamed European dictator and manages to escape back to England, but he can't rest there. He knows too much, and has to go to ground to keep the dictator's forces from finding him. He can't put his compatriots in danger by seeking help, and can't go to the government because of the delicate political situation (this is in the 1930s, so....) It's all very tense and very yummy and you should definitely check it out.
Posted by Mel at 8:27 AM No comments:

If only I'd picked up one more tiny little book last month. Just a wafer-thin one. Pat the Bunny or something. Then I could have a solid average of 25 books per month in the first half of the year, instead of a measly 24.83.

But, alas. I would certainly have exploded.

Anyway, as I was updating my spreadsheet with the 149 titles I did read from January to June, I noticed a few worthy titles I hadn't blogged about, so before I get to my July books, I want to talk about them.

First up, Geraldine Brooks's latest, Caleb's Crossing. I am a huge fan of Brooks, who astounds me with the breadth and scope of her subjects. Being anywhere in her vicinity guarantees me that I will be completely transported, and lose all track of my real life. And she never takes me to the same place twice. In this instance, it was Martha's Vineyard in the 1600s, when young settler Bethia's independent spirit and vast curiosity lead to a furtive and world-opening friendship with a Wampanoag chieftain's son who becomes known to her, and eventually to the world, as Caleb. The novel is based on the slim information available about the life of the real Caleb, who graduated from Harvard in 1665 - the first Native American to do so. Bethia writes of stolen knowledge, of the differences and points of communion between cultures, of words and writing and belonging. Brooks returns to these themes regularly, but never runs out of ways to explore them, or things I want to hear her say about them.

Patrick Ness uses a talking dog to immediately immerse YA (and other!) readers into the dystopian world of The Knife of Never Letting Go, the first of the Chaos Walking trilogy. It's eerie, and mysterious, and Todd, who's not quite a man yet, is thrust deep into danger that goes well beyond the crocs and the viruses and the aliens who were displaced when his people moved with never a bye-your-leave onto their world. Ness keeps the tension balanced on a knife-edge throughout, which led to many many nights, while I was reading this to the 11-year-old, of my succumbing to "just one more chapter" and not nearly enough sleep. Probably we should start the second book soon, before summer ends and regular bedtimes become slightly more important.

The Lover's Dictionary, by David Levithan, plays with the definition of "novel." Each alphabetical page is a word, explicated by a man trying to dissect and find the heart of his relationship with his lover. The definitions are brief but telling, each word chosen carefully and building together into a portrait of what is both wrong and right between them. (Levithan also has a Twitter feed with additional definitions, which is a great thing to add to your own feed, should you have such a thing. I'd wager even those who haven't read the book could get the spirit of the thing.) This is a playful, intriguing novel that gets at a truth about love while also changing a bit what you'd expect from the novel form to begin with.
Posted by Mel at 12:14 AM 1 comment: