Two Successes, a Failure, and a Treat

A few books of note from this month. 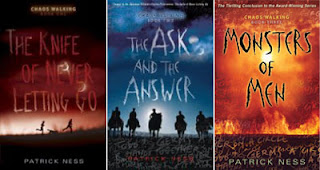 I finally got to finish Patrick Ness's Chaos Walking trilogy, with the audioproducton of Monsters of Men. It is probably not a good thing to be driving down the freeway yelling, "Fucking bastard!" at the CD player, but that is what Ness, via the conniving Mayor Prentiss, forced me to do. I mean, I'm a fairly tolerant person, and not quick to take offense, in real life or by fictional characters. But Prentiss is just so evil and controlling, and I've been attached to Todd from page one of book one of the trilogy, so seeing him caught in the Mayor's web and in the middle of  the Mayor's war was excruciating. It's a good thing I was listening to this instead of reading it to my son, as I did with the first two books, because I would have had trouble controlling my reactions, and let's face it, probably I shouldn't use that kind of language around him. Listening was also great because I so enjoyed the narrators, Nick Podehl, Angela Dawe, and MacLeod Andrews. Frankly, though, I'm going to have trouble with the next book I hear narrated by Dawe, because so much of her own natural voice informed the voice she used for Mistress Coyle, and I was cringing at her treatment of Viola and the people she led almost as much as Prentiss's treatment of Todd.

Another highlight of the month for me was Farthing by Jo Walton. This is not as dystopian as Ness's world (where things were so messed up on Earth that a faction left the planet to settle on New World, which is where all the problems between the Prentiss and Coyle and all them began.) Walton's 1950s Britain is just like our 1950s Britain, except that the British negotiated a truce with Hitler in 1941 that ceded pretty much the rest of Europe to him while they retained self-rule and everyone just put on blinders about the genocide and work camps. Walton stages a murder in the middle of a political house party, brings in an intellectual Scotland Yard detective along with the plodding local police, shines the suspect spotlight on the Jewish husband of the rebellious politico's daughter, and throws in some adultery and communists and train schedules to give it all direction and misdirection. I was so happy to discover this book, and so absorbed in the plot and characters and style. It's book as sustenance, and I am replete.

Contrast that to A Feast for Crows by George RR Martin. In short (as nothing else about it is), I gave up about half-way through and went to the web to find out how it would end. I think three and a half of the Fire and Ice books is a pretty good showing, don't you? (I also used that wiki to find out what happens in the fifth book.)

Now, for those of you who either already love audio or are skeptical about my love of audio, go here. Be sure you have your tissues handy. The narrator Xe Sands started a project to publish short readings of public domain texts, which you can find about with the #goingpublic hashtag if you're on Twitter. (Follow me! I'm dakiMel.) The link above is for Margery Williams's The Velveteen Rabbit, which Sands imbues with such feeling and love that I defy you to read the text yourself without being (positively) informed by her narration. Also at Going Public is my audiocrush Simon Vance, so you can hear why I love him and then believe me and go listen to the dozens of hours of Aubrey-Maturin stories or wherever else you care to find him.
Posted by Mel at 2:44 PM 1 comment:

First - I left work early, picked the 16 year old up from school before his last period, and took him out to the Rural DMV. They were running a little behind, but he finally got to take his road test. He got a 90%. I called the insurance company. So, now he's a licensed driver, and he's spent more time with R's car today than R has.

Second - every once in a while I pull out one of the many American Tradition in Literature volumes we have laying aroud here from R's many many many years teaching high school English, and I read the boys a poem. K rewards me for this with a typical K interpretation afterwards. His favorite poets are "Wolly Mitten" and "Bob Snowy." Can anyone guess who these illustrious men are in non-K reality?
Posted by Mel at 9:26 PM No comments: