Parenthood Was My Idea

I self-identified as the nurturing one. The babies were my idea, especially that first one. The one we had when I was 25, and he'd just turned 27, and we'd only been married for 2 years and 3 days. But I had always been Little Miss Mommy, babysitting my way from middle school to college. Go on, ask me to recite The Wizard of Oz from memory - A & I watched it every Monday afternoon my whole senior year at UCSC. 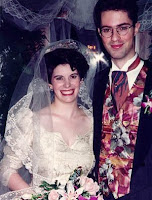 What I'm saying is, it's a good thing Robert didn't put up a fight about having kids. In my young mind, it was simple: we loved each other madly, we were married and had a home and jobs, and kids were next on my agenda. It could be that he was overjoyed at the idea, but I wouldn't know. Didn't ask, or not in a way that wasn't passive-aggressively designed to secure his agreement. Mostly I just started in checking my basal body temp and stressing about how long it took before the bun was securely in the oven.

I had hints that the smart, tall, dark, handsome, studious author I'd married would be a good dad. He was a teacher, after all, and you have to be at least somewhat good with kids to hang out with a bunch of high school boys all day. Plus, his sisters each had three children already, and wasn't that the revelation to me, the day I first saw him playing around with the toddler nephew? He was Pied Piper with them, and clearly enjoyed it. So I was sure my agenda would be fine with him. 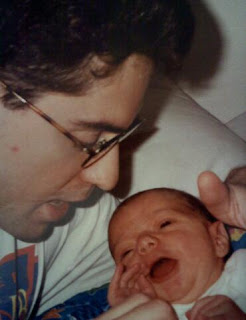 But I had no real idea. Yes, it was beautiful to watch him cradle our first-born while singing "Yellow Submarine" in our hospital room. And he was quite excellent at ensuring that I had everything I needed to stay home with the newborn while he went back to the high school. Diapers, long sessions pacing the floors while humming and bouncing, wigging his bushy eyebrows to make the baby laugh, all of that. He was everything I suspected I'd need, and since I was, after all, the nurturing one, mostly the boys just needed me, right? I even joked ("joked") that I would raise them for the first 10 years, and since Robert was so used to teenage boys, he could handle their second decades. 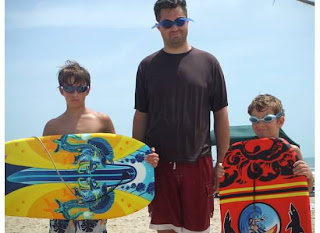 The joke's on me. Robert turned out to be an amazing father. I spent those first 10 years of each son's life listening to friends tell me how lucky I was, genuine awe in their voices, and they didn't know the half of it. Sure, they knew about the soccer coaching, the den leadering and cubmastering, the goofiness around the campfires and the running around the front yard being joyously (loudly) attacked by plastic lightsabers. They may have noticed his overprotective streak, or the fact that he always made sure they had sunscreen on and were happy with their meals. 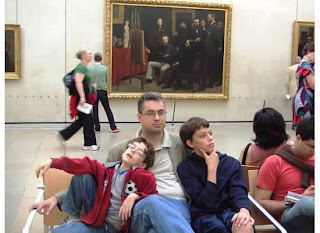 They didn't know about Ted Bear or Hercule McGrew, the heroes of many, many invented bedtime stories that went on for so long that the boys never got to sleep on time. The songs sung, and the guitar chords he's taught them. The hours spent playing games, both raucous and cerebral (and sometimes both.) The facile imagination he brings to family outings - not engaged by straight-up history? How about if you're all members of F Troop, and there's a mission to complete, and an enemy on the horizon? Lefty will send you scouting ahead, but watch out for any snipers hiding behind those barracks. The questions answered, the carpools driven, the homework explained, the meals cooked, the rules enforced, the laughter shared. The many, many, many puns. 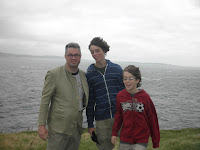 And here we are, both boys in that second decade. Not quite as many Ted Bear stories or F Troop adventures (still lots of puns.) And Robert and his boys are still "bone pals," as defined by a preschooler D - pals forever, even when they're reduced to mere bones. I'm sure I was plenty nurturing for the first 10 years. I do try, still, even though it's rare for a 16 year old to want to curl up in Mommy's lap. (The 12 year old is more accommodating. Also, shorter.) It's not that my Mommy-ness is diminished by the fact that Robert is an inventive, engaged, active and loving father. I suspect it enhances my own parenting as much as it enriches the lives of our sons. What it really does is humbles me. I don't get to take all the credit for what interesting and fun boys I have. I can't look at anything about them and think, "That's all me. I am the Mommy who made this excellence possible." Robert has been far too wonderful a father to them, has touched too many vital aspects of their existence. And the mundane ones. He's everywhere, and they're so lucky. 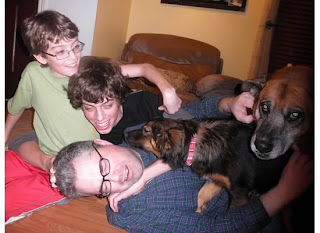 I'll keep claiming that parenthood was all my idea. But I think I'll have to change the story, just a little. I think I'll have to pretend to some prescience - that when I picked Robert to be the guy I'd spend forever with, I just knew, with the brilliance inherent to a head-over-heels 23 year old, that no man on earth could be a better father. Yeah, that's it. All part of the plan.