How to Lose Her: Be a Philandering Jerk 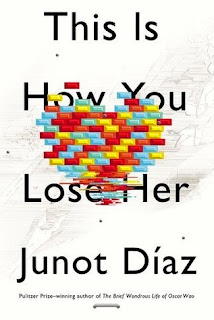 This is How You Lose Her by Junot Díaz
(Riverhead Books, 2012)
Format: Audio CDs via library (narrated by Junot Díaz)

From Goodreads: "On a beach in the Dominican Republic, a doomed relationship flounders. In the heat of a hospital laundry room in New Jersey, a woman does her lover’s washing and thinks about his wife. In Boston, a man buys his love child, his only son, a first baseball bat and glove. At the heart of these stories is the irrepressible, irresistible Yunior, a young hardhead whose longing for love is equaled only by his recklessness--and by the extraordinary women he loves and loses: artistic Alma; the aging Miss Lora; Magdalena, who thinks all Dominican men are cheaters; and the love of his life, whose heartbreak ultimately becomes his own. In prose that is endlessly energetic, inventive, tender, and funny, the stories in This Is How You Lose Her lay bare the infinite longing and inevitable weakness of the human heart. They remind us that passion always triumphs over experience, and that 'the half-life of love is forever.' "

The thing is, no matter how artfully you tell me the story of the bad boy who keeps screwing around and screwing up his relationships, he's eventually got to be a little redeemed for me to care about his self-pitying pain. And while I was quite drawn in to the relationship between Yunior and his dying-young big brother Rafa, this is a collection of stories about romantic love. And Yunior sucks at romantic love. He's great at seducing, at having affairs, at throwing himself passionately at women he reveres even as he treats them poorly. But anyone careless enough to keep years worth of explicit emails from lovers where a rightfully suspicious girlfriend can find them is just not as interested in mature love as he claims. (Perhaps if I'd 'met' Yunior in Díaz's other books I'd be more tolerant of him, but coming to him cold leaves me, well, a bit cold.)

It's a great audio production, though. Díaz is phenomenal at tapping into his narrative voice as he reads. Now, you'd think that this is a no-brainer - he is the author, after all - but I've heard plenty of narration by authors, and non-authors, where the narrative voice is flat and uninspired. The dialogue may be great, the pacing lovely, but without that connection to the 'in between' bits, an audio book just isn't rich enough. Díaz's narration kept me engaged no matter how I felt about Yunior, and I'm glad, since his writing is lush and raw and inviting.
Posted by Unknown at 11:21 PM