The Girl You Left Behind by Jojo Moyes

Honeymoon in Paris by Jojo Moyes (ebook-only prequel to:)
The Girl You Left Behind by Jojo Moyes
(Viking, 2013)
Format: ebooks via Net Galley

From Goodreads: "At the heart of The Girl You Left Behind are two haunting love stories - that of Sophie and Edouard Lefevre in France during the First World War, and, nearly a century later, Liv Halston and her husband David.
Honeymoon in Paris takes place when both couples have just married. Sophie, a provincial girl, is swept up in the glamour of Belle Epoque Paris but discovers that loving a feted artist like Edouard brings undreamt of complications. Following in Sophie's footsteps a hundred years later, Liv, after a whirlwind romance, finds her Parisian honeymoon is not quite the romantic getaway she had been hoping for...." 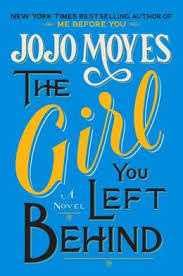 From Goodreads: "In 1916 French artist Edouard Lefevre leaves his wife Sophie to fight at the Front. When her town falls into German hands, his portrait of Sophie stirs the heart of the local Kommandant and causes her to risk everything - her family, reputation and life - in the hope of seeing her true love one last time.

Nearly a century later and Sophie's portrait is given to Liv by her young husband shortly before his sudden death. Its beauty speaks of their short life together, but when the painting's dark and passion-torn history is revealed, Liv discovers that the first spark of love she has felt since she lost him is threatened...."

I loved Moyes's easy, accessible prose and tender regard for her characters in Me Before You, and this trip to France during WWI was equally as deft, and maybe even more compelling. Sophie in particular is a charmer of a girl, well worth the adulation of everyone who sees the portrait her husband painted of her before the war. But she's more than the direct beauty of her painting - she's brave, she's foolhardy, she's passionate, she's willing to risk herself for her community and, most importantly, for her husband. And risk herself she does. Over and over and over again, pushing the bar further each time - not for the the adrenaline rush or her own ego, but because the stakes keep going up and Sophie has to keep anteing up. It's terribly engrossing and tense.

Meanwhile, in the modern story, Liv starts out in a fairly dismal place: widowed, underemployed, struggling to hang on to the home her architect husband built, alone. For Liv, each brief spark that might bring her into a brighter life is quickly extinguished, but at least the process of finding those sparks begins to bring her back to life.

I was less enamoured of the prequel story. The Sophie-Edouard honeymoon was charming and appealing and only increased my love of her story. But Liv-David (and I read this after I'd read the novel) left me a little flat. Mainly David. Just not that in love with the poor guy, alas. Still, it was great fun to once again see the relationship across time between Liv and Sophie.
Posted by Unknown at 2:43 PM