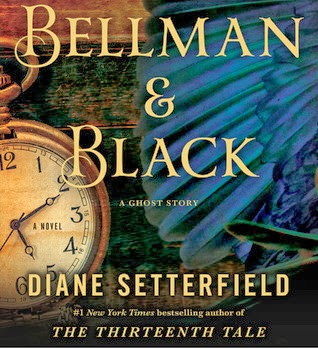 From Goodreads: "Bellman & Black is a heart-thumpingly perfect ghost story, beautifully and irresistibly written, its ratcheting tension exquisitely calibrated line by line. Its hero is William Bellman, who, as a boy of 11, killed a shiny black rook with a catapult, and who grew up to be someone, his neighbours think, who 'could go to the good or the bad.' And indeed, although William Bellman's life at first seems blessed - he has a happy marriage to a beautiful woman, becomes father to a brood of bright, strong children, and thrives in business - one by one, people around him die. And at each funeral, he is startled to see a strange man in black, smiling at him. At first, the dead are distant relatives, but eventually his own children die, and then his wife, leaving behind only one child, his favourite, Dora. Unhinged by grief, William gets drunk and stumbles to his wife's fresh grave - and who should be there waiting, but the smiling stranger in black. The stranger has a proposition for William - a mysterious business called 'Bellman & Black'..."

Let's not begin any discussion of Setterfield without my urging you to check out The Thirteenth Tale, which I read before I started this blog, but which would have earned a lot of virtual space here. It was captivating and fun and adroit.

Bellman & Black is different. It unfolds at a slower pace, and dives into different concerns, and didn't make me impatient to get back to it. Which makes it different, but not bad. I still very much enjoyed Setterfield's tone and language and mastery of the trajectory of her story. It's a ghost story in a similar vein, I thought, to Sarah Waters's The Little Stranger; not very ghostly, but with a mysterious presence overseeing the action. Not a very meddlesome presence, in this case - almost more theoretical than real, and certainly anyone (with the possible exception of Bellman) could explain away Black's pseudo-presence. It was captivating, but in less of a race-through-it-and-go-back-immediately way.

Bellman spoke to me. He's not someone you get to know deeply, but he's someone you observe closely. He's not sure, often, why he is driven as he is, but he's good at his work, smart, intuitive, gifted. It's hard to dislike Bellman, just as it's hard to relax with Bellman. He shows his love for his uncle, his mom, his wife, his kids by working as hard as he can to do benefit to them. (He's a lot like my dad.) (Except, I hope, for the being haunted by the rook who he killed as a lad part.) I was engrossed by the steps involved to set up Bellman & Black (the company) - the builders, the hiring of staff, the decisions about merchandise. (My company used to sell displays for funeral homes; we still have partial caskets laying around.) It all spoke to me, and made it all the easier to empathize with Bellman disappearing into the demands of his business to the exclusion of all else. He was, ultimately, a tragic character but a noble one.

Davenport's narration of Bellman & Black is fluid, with just a hint of creepiness edging the clarity. I liked his ability to access a fairy-tale place when the text called for it, without taking the whole book along for the ride.
Posted by Unknown at 2:39 PM