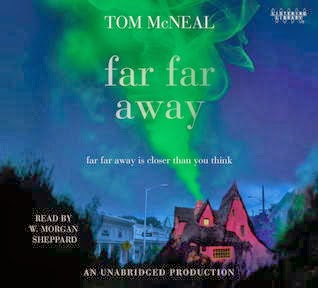 From Goodreads: "It says quite a lot about Jeremy Johnson Johnson that the strangest thing about him isn't even the fact his mother and father both had the same last name. Jeremy once admitted he's able to hear voices, and the townspeople of Never Better have treated him like an outsider since. After his mother left, his father became a recluse, and it's been up to Jeremy to support the family. But it hasn't been up to Jeremy alone. The truth is, Jeremy can hear voices. Or, specifically, one voice: the voice of the ghost of Jacob Grimm, one half of the infamous writing duo, The Brothers Grimm.
Jacob watches over Jeremy, protecting him from an unknown dark evil whispered about in the space between this world and the next. But when the provocative local girl Ginger Boultinghouse takes an interest in Jeremy (and his unique abilities), a grim chain of events is put into motion. And as anyone familiar with the Grimm Brothers know, not all fairy tales have happy endings..."
This is nominated in the 2014 Audies Teens category, which I've listened to for the Armchair Audies project.

Jeremy Johnson Johnson is a bit of a cipher, but that's not going to stop Ginger Boultinghouse (who is a bit of a manic pixie) from working on figuring him out as he works on figuring out how to save his business and his dad and his companion-ghost Jacob Grimm works on figuring out who the Big Bad is in town. (Grimm has other-worldly knowledge that there's some sort of threat to Jeremy out there, but no one knows who that threat is.) Throughout there are allusions to various Grimm tales - children encouraged to look into big ovens, in particular - which are a fun touch. It's not the usual kind of updated fairy tale story - it's a little quirkier and a lot looser.

Mostly I liked it. It's playful and fairly well put together and as long as we can suspend all disbelief about the roles of all kinds of world-saving shenanigans run by teenagers only mildly supervised by a ghost.