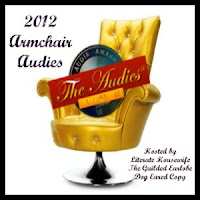 And the Armchair Audies listens march on into April.... I've added another completed title to my spreadsheet from the "Teens" nominees, and it's not just that the last thing is the best thing - this was a truly excellent choice. This is a seriously well developed group of nominees. 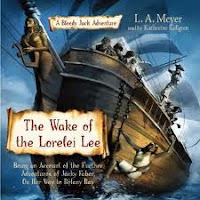 Granted, The Wake of the Lorelei Lee: Being an Account of the Adventures of Jacky Faber, on Her Way to Botany Bay is an excessively long title, even by L.A. Meyer's standards. I'll just call it Lorelei Lee for short, and be glad to have listened to it. As I mentioned last summer, I am excessively fond of Jacky Faber, who by the age of sixteen has impersonated a ship's boy in His Majesty's Navy, refined her Cockney roots at a Boston boarding school, became a privateer accused of piracy, been captured by slavers, piloted a ship down the Mississippi, spied for England in Napoleon's army, and dived for sunken Spanish treasure. Now she has been accused by nemeses Bliffil and Flashby of stealing some of the Spanish gold, and, as the title suggests, sentenced to transportation to Botany Bay. Although the transportation sentence was fairly foregone, the imprisonment and trial kept me on the edge of my seat (well, when I was sitting while I listened - I quickly became too impatient to parcel this story out during my commute, and carried it with me throughout my days as well.)

Being Jacky, imprisonment on a transport ship is hardly enough to squelch her spirit, or stop her from getting into further scrapes. Friends and foes both old and new abound in this story, and Meyer as usual keeps the story rolling along through yet another evocatively-conveyed slice of time and place. Lorelei Lee definitely ranks as one of my favorite of the Jacky Faber tales, and although it is the 8th and therefore represents an investment to readers, I do recommend the entire series, in order. (Blue Tattoo is my least favorite, but it establishes an important part of Jacky's world. I just like it best when she's on the water.) While I'm at it, I'll also recommend Naomi Novik's Temeraire series (more Napoleonic-era British Naval globe-trotting, but with dragons) and Patrick O'Brian's Aubrey-Maturin series (again with His Majesty's Royal Navy criss-crossing the globe in the early 1800s.) Audios for both of those series are read by the incomparable Simon Vance.

Like Vance, Katherine Kellgren has a voice I could (oh, and do!) listen to for hours. She so thoroughly inhabits Jacky, who is a girl of many, many moods. Many. And throughout the series, Kellgren gives not only Jacky but her beloved Jaimie, her devoted Higgins, and a panoply of tertiary characters deeply developed and individual voices. Go ahead, test me. Play two or three random words of Kellgren's dialogue of Jacky, Jaimie, Higgins, or Amy. I can tell you not only who it is, but what mood they're in. (Sure, most of the time the mood is "outraged or frustrated by the latest thing Jacky has gotten herself into," but that's hardly the point.)

Particularly admirable in this novel, Kellgren has to do a lot of singing. And not just in Jacky's voice - a whole host of characters from a whole range of accents and timbres in a variety of styles all lift their voices in song during Lorelei Lee, and Kellgren nails them all. I have a tin ear myself, so to me this is a mind-boggling accomplishment. And it's all great fun to hear, to boot - one of the things I can point to when people wonder what makes listening to some books preferable to reading them.
Posted by Unknown at 8:30 AM