No Thanks for the Memories 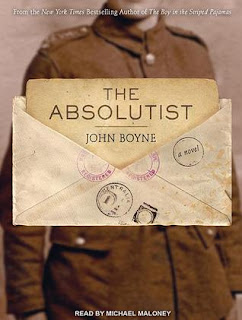 From Goodreads: "It is September 1919: twenty-one-year-old Tristan Sadler takes a train from London to Norwich to deliver a package of letters to the sister of Will Bancroft, the man he fought alongside during the Great War. But the letters are not the real reason for Tristan's visit. He can no longer keep a secret and has finally found the courage to unburden himself of it. As Tristan recounts the horrific details of what to him became a senseless war, he also speaks of his friendship with Will-from their first meeting on the training grounds at Aldershot to their farewell in the trenches of northern France. The intensity of their bond brought Tristan happiness and self-discovery as well as confusion and unbearable pain. The Absolutist is a masterful tale of passion, jealousy, heroism, and betrayal set in one of the most gruesome trenches of France during World War I. This novel will keep listeners on the edge of their seats until its most extraordinary and unexpected conclusion, and it will stay with them long after they've finished."

John Boyne (The Boy in the Striped Pajamas, etc.) loves war. Well, okay, that's unfair. He loves to explore people in crisis and identity and the difficulty of changing your role in the world. And history. So war is a great venue for his writing, what with the undiscriminating nature of bullets and the pressure cooker applied to teenage personalities, and all that. Plus loss and sorrow and decades of memory for the survivors.

Another thing about Boyne: like Ishiguro (and my husband and I) he went to UEA in Norwich for a Masters in creative writing. (We were a lot more contemporaneous with Boyne.) Somehow I didn't know that, but as soon as Tristan starts wandering around Tombland and drinking local brews and watching shoppers in the rectangle of awnings at the open-air market, I suspected. It was a lot of fun to revisit those streets with Tristan (I wish he'd made it onto the Unthank Road at some point. Because: a road named Unthank!)

Okay, that walk down Memory Lane aside (and could I be more literal? R & I were talking just the other day about our early courtship walks along the Unthank Road), there's a lot for the non-Norwichian to enjoy in this novel. Tristan is at once knowable and intriguing, a man struggling with his identity, his actions, his relationship with his family, and his place in the war. He's only 21, but after enlisting at 17 and serving several years in the trenches "over there," his soul is an old man's. But his heart is still as precariously confused and frightened as it was when his father kicked him out at 16 for transgressions that clearly have to do with his unreciprocated feelings towards his best friend. Once he joins the army, he meets Will, whose death eventually leads Tristan to meeting Will's sister Marian in Norwich. The army training camp friendship becomes both a trial and a joy to Tristan. Will, meanwhile, is struggling with entirely different but equally soul-shattering issues, and his combination of courage and callousness makes him a pretty absorbing guy to get to know. One of the many interesting angles in this novel are the overlapping but not identical portraits of Will as explained by Marian and by Tristan. I love the slight shifts and the gaps.

This is another in the Audies category of Solo Narration - Male, and my first experience of Michael Maloney's narration. I wasn't wowed. He was good for Tristan, other than my wish for a touch more emotional vulnerability when discussing the events of his early teens, but every word out of Marian's mouth grated on me. Not that the character wasn't somewhat brittle and acerbic, but the text made it clear that she was also quiet and tender at times, and you'd never guess it from Maloney's tone. I also had problems with the sound mixing in this - listening to the CDs in a couple of environments (home and car) I constantly had to adjust the volume and the bass to make up for inexplicable variances. It so rarely happens that I need to do anything like this that it bears mentioning now, and it made me question the nomination in this case.