My Secret Feelings about The Goldfinch 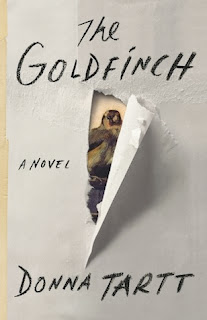 You guys! I'm struggling. Struggling to explain away my niggling negativity towards Donna Tartt's The Goldfinch. Should I have read it instead of listening? But David Pittu's narration was quite good, his voices interesting and consistent and his Theo, in particular, accessible and familiar. Is it because I'm working so much on my own writing at the moment? But I've noticed writerly tricks in other authors' works and not felt irritated by them. Is it the high expectations stemming from my love of The Secret History? But I've already been vaguely disappointed by The Little Friend, so I ought to be inured to Tartt's follow-ups not delighting me in that same way.

One thing is, I didn't like Theo very much. He was a little bit of a punk before his mother died and he took The Goldfinch (though I will say I was delighted by Tartt's creation of his 13-year-old boy voice. I spend a lot of time with smart 13-year-old boys, and she did beautiful things with the tension between child and young man, a boy who has an active - if not admirable - secret life but who still holds his mom's hand and worries about her opinion of him.) The pinball trajectory of his teen years and the overwhelming influence of Boris on his life works well and makes sense. But I am rarely interested in pages and pages of a drug-fueled life, no matter how artful or how consistent for the character. So that's part of it.

The other thing is, the visibility of the construction. Tartt puts guns on the mantle piece and says, "Look, a gun. On the mantle piece." Then she references the gun, or the mantle piece. And then the gun goes off. I found the transparency too blunt, too often. Kid is left holding a priceless painting. How about if he befriends an antiques restorer who teaches him something about preservation techniques? Hey, Boris is chewing on a thumbnail - watch out, it means something. Not that Theo will trouble to find out. It happens repeatedly, big and small things. Andy's deep dislike of sailing. Theo's engaged lover. Every mention of Tom.

I love Tartt's writing on the sentence level, the paragraph level. Her scene-setting is evocative, often gorgeous. I love Xandra and Mrs. Barbour and Pippa and especially I love Boris and Hobie. But Theo had so little agency, other than his idée fixe about the fate of the painting, always running from instead of towards, always upset but not seeking solutions.

And here's where I'm going to complain about the ending, so stop reading unless you want big spoilers.


The set-up, fine. I'm okay with his ruined suit and missing passport he doesn't try to do anything about until Christmas Eve. I guess. Not crazy as always about the drug-and/or-fever-induced dreams. But especially feel cheated by Tartt using 'dead cell phone, can't possibly find a charger or get a new damn phone or call voice mail service or log in online to see your texts or any other way for anyone to get in touch with him' as a device. He never checks email? Boris never phones the hotel? Coupled with 'oh these Dutch papers I can't read are the only ones I could possibly get my news from so don't even bother delivering the International Herald Tribune to me, thanks,' I was about ready to throw the book across the room, except it was an audiobook I was listening to on my phone, since THAT'S HOW TECHNOLOGY WORKS NOW, Tartt, and you can be as elaborate as you want in explaining why he's not accessing it, but it's going to read like you're trying too hard and you're not then justifying that effort with a payoff. If somehow Theo had woken up and managed to direct his own destiny, I might have been able to ignore those factors, but he didn't, so it's a constant thorn.
Posted by Unknown at 5:43 PM