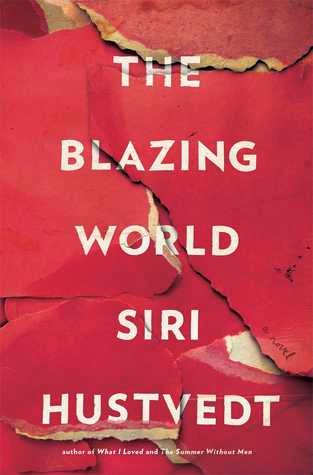 From Goodreads: "Hustvedt tells the provocative story of the artist Harriet Burden. After years of watching her work ignored or dismissed by critics, Burden conducts an experiment she calls Maskings: she presents her own art behind three male masks, concealing her female identity.
The three solo shows are successful, but when Burden finally steps forward triumphantly to reveal herself as the artist behind the exhibitions, there are critics who doubt her. The public scandal turns on the final exhibition, initially shown as the work of acclaimed artist Rune, who denies Burden’s role in its creation. What no one doubts, however, is that the two artists were intensely involved with each other. As Burden’s journals reveal, she and Rune found themselves locked in a charged and dangerous game that ended with the man’s bizarre death.Ingeniously presented as a collection of texts compiled after Burden’s death, The Blazing World unfolds from multiple perspectives. The exuberant Burden speaks—in all her joy and fury—through extracts from her own notebooks, while critics, fans, family members, and others offer their own conflicting opinions of who she was, and where the truth lies.From one of the most ambitious and interna­tionally renowned writers of her generation, The Blazing World is a polyphonic tour de force. An intricately conceived, diabolical puzzle, it explores the deceptive powers of prejudice, money, fame, and desire."


What a premise, what style, what ideas! This book made me buzz with things I wanted to discuss with others (could y'all just all go read it now then talk at me?) Like, I've been ranting on to my husband and sons this summer about how often women are referred to by their first names, while men are referred to by their last names. (Yeah, yeah, I get that's not universal, you don't have to give me a bunch of examples.) So when Hustvedt has Burden rant about the same thing, ascribing it to a patriarchal, infantilizing impulse, I just wanted to cheer. I love Burden's rage at the same time as I railed about the necessity for it, which is a sure sign that I was overly invested in her journey.

So it's fair to say I'd love to sit at Hustvedt's side and just chat with her all the time. And I quite enjoyed the back-and-forth of the sometimes conflicting narratives in the 'source material' of people close to Burden's Maskings project. And I enjoyed getting to know the characters and following their stories. There's such humor and humanity in Hustvedt's people.

Read this book, then tell me if it made your feminist tendencies rise up their fists in solidarity and power, and also if you think Ethan was quite as realized as you'd have liked.
Posted by Unknown at 9:00 PM