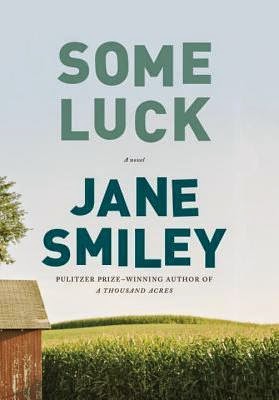 From Goodreads: "On their farm in Denby, Iowa, Rosanna and Walter Langdon abide by time-honored values that they pass on to their five wildly different yet equally remarkable children: Frank, the brilliant, stubborn first-born; Joe, whose love of animals makes him the natural heir to his family's land; Lillian, an angelic child who enters a fairy-tale marriage with a man only she will fully know; Henry, the bookworm who's not afraid to be different; and Claire, who earns the highest place in her father's heart. Moving from post-World War I America through the early 1950s, Some Luck gives us an intimate look at this family's triumphs and tragedies, zooming in on the realities of farm life, while casting-as the children grow up and scatter to New York, California, and everywhere in between-a panoramic eye on the monumental changes that marked the first half of the twentieth century. Rich with humor and wisdom, twists and surprises, Some Luck takes us through deeply emotional cycles of births and deaths, passions, and betrayals, displaying Smiley's dazzling virtuosity, compassion, and understanding of human nature and the nature of history, never discounting the role of fate and chance. This potent conjuring of many lives across generations is a stunning tour de force."

Smiley has long been one of my most treasured modern writers, and Some Luck does everything to cement my love for her. I very quickly became part of Walter and Rosanna's family - one of the siblings, eager to get my own back at Frank (as a second-born myself, I found it essential to identify with poor Joe, who everyone discounts, but he proves them wrong.) The Langdon world is small but perfectly complete, and Smiley makes it easy to view each member through the shifting prisms of everyone else's perspective. Lillian's Henry is not Rosanna's Henry is not Claire's Henry, and yet each Henry is so perfectly Henry. If you get what I mean.

Time for a couple of quotes, because Smiley can write a sentence that steals my breath and stills my heart:


There are hundreds of quiet reflective moments in this novel, as well as fighting and war and drought and deaths and depression. And joy. And love. And the push-pull centrality of family as the Langdon world expands outward due to WWII and technology and education. It's time well spent, reading this novel, and I'm thrilled that it's first in a trilogy (not that I didn't reach the last page - another truly amazing sentence I won't quote due to spoilers - in tears and completely satisfied with the novel on its own.)

2014's just about up, and I didn't think I'd be sucker-punched again like I was with Lila, but it turns out, I was wrong.
Posted by Unknown at 2:07 AM