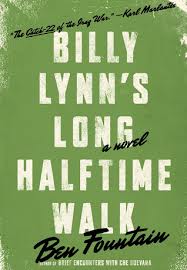 From Goodreads: "A ferocious firefight with Iraqi insurgents at "the battle of Al-Ansakar Canal"--three minutes and forty-three seconds of intense warfare caught on tape by an embedded Fox News crew--has transformed the eight surviving men of Bravo Squad into America's most sought-after heroes. For the past two weeks, the Bush administration has sent them on a media-intensive nationwide Victory Tour to reinvigorate public support for the war. Now, on this chilly and rainy Thanksgiving, the Bravos are guests of America's Team, the Dallas Cowboys, slated to be part of the halftime show alongside the superstar pop group Destiny's Child.
Among the Bravos is the Silver Star-winning hero of Al-Ansakar Canal, Specialist William Lynn, a nineteen-year-old Texas native. Over the course of this day, Billy will begin to understand difficult truths about himself, his country, his struggling family, and his brothers-in-arms--soldiers both dead and alive. In the final few hours before returning to Iraq, Billy will drink and brawl, yearn for home and mourn those missing, face a heart-wrenching decision, and discover pure love and a bitter wisdom far beyond his years."

I went into this not really knowing what to expect, and came out of it with a totally new perspective on the experience of soldiers returning from war. Billy and his squad are thrust into a limelight far more odd and unsettling, in some ways, than the war itself, if only because there is very little in the way of a goal to it all. They are props to the people they meet, a cell phone photo op as significant as a flag pin or yellow ribbon, as far as the impact on their own lives. Because when the media tour is up, unless the producer they've been matched with manages to chase down the dream of a film deal out of their firefight, it's back to the status quo (such as it is) of daily service in Iraq, and the world will go back to not really knowing much of what their lives are like.

The Bravo Squad men are the most compelling and vivid of Fountain's characters. Having these young men - many of them still in their teens - standing beside Dallas Cowboy Cheerleaders, rich businessmen, Hollywood dealers, roadies, and pop stars points up the vast difference an experience of warfare gives. Billy's outlook is changed, and his fellow soldiers are the ones who understand that, in ways that no cheerleader or family member back home can. So while I might have looked for a little more dimension from the civilians, I can also appreciate the reversal that it's the soldiers who become real while the people back home are the props in their strange post-fame trip.