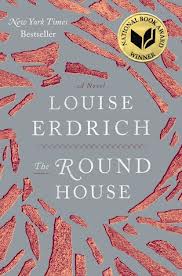 The Round House by Louise Erdrich
(Harper, 2012)
Format: ebook via library

From Goodreads: "One Sunday in the spring of 1988, a woman living on a reservation in North Dakota is attacked. The details of the crime are slow to surface as Geraldine Coutts is traumatized and reluctant to relive or reveal what happened, either to the police or to her husband, Bazil, and thirteen-year-old son, Joe. In one day, Joe's life is irrevocably transformed. He tries to heal his mother, but she will not leave her bed and slips into an abyss of solitude. Increasingly alone, Joe finds himself thrust prematurely into an adult world for which he is ill prepared.
While his father, who is a tribal judge, endeavors to wrest justice from a situation that defies his efforts, Joe becomes frustrated with the official investigation and sets out with his trusted friends, Cappy, Zack, and Angus, to get some answers of his own. Their quest takes them first to the Round House, a sacred space and place of worship for the Ojibwe. And this is only the beginning."

Anyhow, it's not like I wasn't going to like The Round House, is what I'm saying. I didn't need the acclaim or National Book Award sticker to convince me to give it a try. But if it helps any of you decide to pick it up, excellent. You'll find yourself in a deeply complex and beautifully realized world, connecting with everything about Joe. He is on the brink between childhood and adulthood, and the attack on his mother shoves him firmly in the adult direction. The freedom of a teenage summer, time with friends, first jobs, biking and exploring and experimenting in ways I'll pretend my own teens would never consider, slammed up against a world full of darkness. Terror and pain and emptiness and loss, plots both immediate and far-reaching. Joe has to learn who to trust, and how to handle trust that is broken. He has to navigate the often irrational-seeming strictures of reservation life, learning why laws on one side of a line apply differently than laws on another. He looks to his father, to traditions, to the church, to his friends, in his attempts to stabilize the ground beneath his feet that fell away when his mother was attacked. And it's neither a smooth nor a straight road. But it's a journey you'll be glad you took at his side.
Posted by Unknown at 11:27 PM