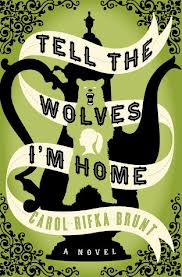 From Goodreads: "In this striking literary debut, Carol Rifka Brunt unfolds a moving story of love, grief, and renewal as two lonely people become the unlikeliest of friends and find that sometimes you don’t know you’ve lost someone until you’ve found them.
1987. There’s only one person who has ever truly understood fourteen-year-old June Elbus, and that’s her uncle, the renowned painter Finn Weiss. Shy at school and distant from her older sister, June can only be herself in Finn’s company; he is her godfather, confidant, and best friend. So when he dies, far too young, of a mysterious illness her mother can barely speak about, June’s world is turned upside down. But Finn’s death brings a surprise acquaintance into June’s life—someone who will help her to heal, and to question what she thinks she knows about Finn, her family, and even her own heart."

Sweet, intense as only teenage emotions can be but wise and transcendent as well, this is another "YA" novel that blurs lines as it sharpens focus on an unforgettable character. I want to have been June's best friend, but then again, if she had had me, she wouldn't have needed her Uncle Finn in the same way. And her friendship with and devotion to him is the fire that forged June. When AIDS kills Finn (this is among other things a book that gets exactly right the attitudes towards HIV in the late 80s), June can only see what that means for her. Experience is only through her prism, because she is a grieving 14 year old, and the shattering of that prism is the novel's arc. She has to come to accept the parts of Finn she never knew - not only his fame as a painter, but his relationship with a long-time lover she never suspected, and how that relationship colored his relationship with her mother. In so doing, June confronts her myopia about Finn but comes to an understanding of him - and of herself - that enriches the reader as well as the characters. It's an exceptionally well-paced narrative journey, and Brunt is brilliant at creating deeply true interpersonal relationships.