Meet the Best Innkeepers in Town

Three cheers for me - I caught up (thanks largely to this short 4th book) to my Les Mis Project schedule, and can now go on for a bit about the fate of poor Fantine's baby. With little ado, let's see what's next in  Victor Hugo's Les Misérables (Volume 1: Fantine.) (I sure have a lot to say about this bit, but Hugo is so snarky and Cosette is so pitiful. It's a good post, I promise, despite its length.)

Book Fourth - To Confide is Sometimes to Deliver into a Person's Power
With that rather ominous title, we see what Fantine's been up to in the ten months since Tholomyes left. Well, first we see a pretty little scene outside the Thenardier's cook-shop, with Madame overseeing her two toddler girls swinging on the chain of an old truck in the street. (Hugo's typical drollery asks, "Why was that fore-carriage of a truck in that place in the street? In the first place, to encumber the street; next, in order that it might finish the process of rusting." (p.112)) Madame is "watching them carefully, for fear of accidents, with that animal and celestial expression which is peculiar to maternity." (p.112) It's all quite sweet.

So, in the ten months since that summer day when the guys abandoned their mistresses, the other women have gone off to find new paramours. Fantine "found herself absolutely isolated, minus the habit of work and plus the taste for pleasure. Drawn away by Tholomyes to disdain the petty trade which she knew, she had neglected to keep her market open; it was now closed to her." (p.114) So she's broke, illiterate, and solo parenting a growing girl. (Hey, did you know that Cosette was already around when Tholomyes took off? I always interpreted "her father abandoned us, leaving us flat" after "a summer by my side" as his taking off while she was pregnant, maybe before he knew about the baby. Nope. What a tool.

She sends him a couple of letters, which he ignores, and meanwhile she "heard the gossips say, as they looked at her child: 'Who takes these children seriously! One only shrugs one's shoulders over such children!' " (p.114) So very Gallic, no? Fantine gives up on Tholomyes and, with no other recourse, heads for her hometown, though she can't get work there if they find out about the baby and the whole mistress thing. (FYI, before Cosette's daddy goes out of the picture entirely, we find out that he becomes a rich, successful, influential, jolly man. Jerk.)

Anyway, down the road walks Fantine with the sleeping Cosette in her arms, and sees this tableaux of mother with swinging little girls, and of course (the naivete is still in full force) interprets it as a good sign and bargains with them to take care of Cosette for six months while she finds work. After pretty much fleecing her, the Thenardier's agree and off Fantine goes. Cosette (who, BTW, isn't really named Cosette - that's a nickname for Euphrasie. "But out of Euphrasie the mother had made Cosette by that sweet and graceful instinct of mothers and of the populace which changes Josepha into Pepita, and Francoise into Silette. It is a sort of derivative which disarranges and disconcerts the whole science of etymologists." (p.116) - Hugo being funny again.) is a gorgeous baby, almost 3, and settles in well.

Unfortunately, the Thernardier's aren't exactly loving foster parents. In addition to the constant increases in the amount they asked from Fantine, they quickly started dressing her in too-small cast-offs from their daughters, and feeding her scraps under the table along with the family pets, and other such delightful maltreatment.

Turns out that in addition to whatever innate grossness the Ternardier's possessed, some of the blame can be placed on romance novels! You see, "the female Ternardier was nothing but a coarse, vicious woman, who had dabbled in stupid romances. Now, one cannot read nonsense with impunity. The result was that her eldest daughter was name Eponine; as for the younger, the poor little thing came near to being called Gulnare; I know not to what diversion, effected by a romance of Ducray-Dumenil, she owed the fact that she merely bore the name of Azelma." (p.118) So, apparently I should listen to my sons when they chastise me for reading "those novels." Or I should feed them out of the dog bowls.

As Cosette aged, her foster family grew meaner, though they certainly treated their own daughters well. "It is sad to think that the love of a mother can posses villainous aspects. Little as was the space occupied by Cosette, it seemed to her as though it was taken from her own.... This woman, like many women of her sort, had a load of caresses and a burden of blows and injuries to dispense each day. If she had not had Cosette, it is certain that her daughters, idolized as they were, would have received the whole of it; but the stranger did them the service to divert the blows to herself." (p.119) 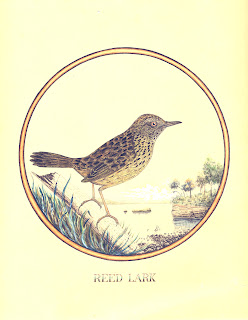 Here's a wrenching scene, if ever I've read one. (It almost makes me tolerate the intolerable Castle on a Cloud song.) Check out how this book ends:

"It was a heart-breaking thing to see this poor child, not yet six years old, shivering in the winter in her old rags of linen, full of holes, sweeping the street before daylight, with an enormous broom in her tiny red hands, and a tear in her great eyes.
"She was called the Lark in the neighborhood. The populace, who are fond of these figures of speech, had taken a fancy to bestow this name on the trembling, frightened, and shivering little creature, no bigger than a bird, who was awake every morning before any one else in the house or the village, and was always in the street or the fields before daybreak.
"Only the little lark never sang."