Book Second - The Fall
So, after a day of walking, a bedraggled 40-something wanders into town - first stop, the fountain for a drink, second stop, the town-hall where he registers himself. He's - you guessed it - Jean Valjean. (Love this: '...his father was called Jean Valjean, probably a sobriquet, and a contraction of viola Jean, "here's Jean." ' (p.71) - get your Ed McMahon voice ready, y'all!) He betakes his weary self to the nice inn and is about to settle in for some food and a room when the innkeeper gets the word about the newly-paroled prisoner who has just registered his presence. Word spreads quickly, to the 'kids throwing rocks as he walks down the street' point as he finds a grottier tavern. But he's turned out there, too. He tries at a house to ask permission to sleep in the barn, but the father there has heard the rumors and sends him away. It's late, and dark, and he tries what looks like an abandoned hut, only to be chased out by the resident dogs. Finally he curls up on a stone bench, only to have a kind passing woman point out M. Myriel's door when he claims to have tried every place in town. The Bishop's sister and servant have heard the rumors, too, and are suggesting that, just for the night, they put a bolt on the front door, because it's never secure, and "Monseigneur has the habit of always saying 'come in'..." (p.64), which, of course, is the cue for the 'tolerably violent knock on the door,' and the Bishop's inevitable, "Come in."

Valjean, rough and sinister, in the doorway, freaking the womenfolk right out, blurts out the whole 'convict - nineteen years - yellow passport - no room at the inns - can you feed me?' story. Bishop says sure, but Valjean doesn't believe him, repeats the whole spiel, and Bishop tells the women to make up a bed for him, too. Valjean is befuddled that he's being received, being called sir, out of the weather, and so forth. He babbles in disbelief, until the Bishop (who Valjean thinks is a simple priest, because Bishops are too high and mighty to feed the hungry) answers him: 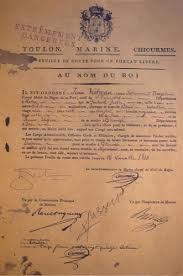 So you see, he really did give the silver to Jean Valjean! I mean, sort of. In a way. Poor Jean, his parents died when he was young, and he was raised by his sister, who was widowed with a seven small kids, so Jean had to become breadwinner to them when still a young man himself. And though he was super-strong and agile, making him a good tree pruner, the work wasn't always there. And the sister's children were starving. And the baker's house had a tempting loaf of bread in the window. (I believe you know the story here - five years for what he did, the rest because he tried to run.) He actually had three escape attempts, often as he was nearing the end of his previous sentence:


While he was in prison - well, Hugo explains it best (duh):

And it's this second kind of evil action that comes next. Because after a few hours sleep on the unaccustomed luxury of a soft bed, Jean wakes up and fixates on those silver forks and stuff he saw being put away at bedtime, in the Bishop's room. Right next door. In the silence of the night, he devises an escape route, tiptoes in to see the Bishop sleeping a just and innocent sleep while Jean's conscious beats up on him some, and heads out into the garden with the basket of silver. He hightails it over the wall, making for a very amusing scene the next morning when the Bishop is wandering his garden. Madame Magloire 'in utter consternation' asks if he knows where the silver basket is, and he says yes, here you go (picking it from the flower-bed and handing it over.) She points out that it's empty. ' "Ah," returned the Bishop, "so it is the silver which troubles you? I don't know where it is." '(p.85) (The Bishop would be a very amusing if occasionally exasperating guy to share a house with.)

Soon enough, the gendarmes show up with Jean Valjean, all sarcastic about the silver. (Tell his Reverence your story. / Let us see if he's impressed. / You were lodging here last night / You were the honest Bishop's guest.) Before they can even suggest that he stole the silver (and before Valjean can process the fact that his host was a Bishop, not a mere priest), M. Myriel jumps in to ask about the candlesticks (You forgot I gave these also. / Would you leave the best behind?)

Valjean's a little stumped, especially when the Bishop says, "Do not forget, never forget, that you have promised to use this money in becoming an honest man." (p.86) and adds, "Jean Valjean, my brother, you no longer belong to evil, but to good. It is your soul that I buy from you; I withdraw it from black thoughts and the spirit of perdition, and I give it to God." (p.87)

So that's a pretty swift change from the nineteen years lessons, which leads, as you undoubtedly suspect, to a bit of what have I done, but only after he dashes around dazed and confused for a while, giving into the first, instinctive evil action for a moment (stealing from a poor kid! aw!) Once he comes out of his stupor, Jean Valjean ends the Book back on the Bishop's doorstep, weeping, realizing that Things Will Now Change for him.
Posted by Mel at 12:34 AM